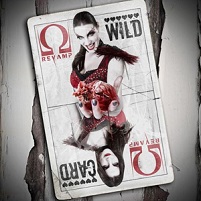 In today’s scene, when a higher profile band calls for your services, you don’t hesitate. In the case of ReVamp vocalist Floor Jansen, when Nightwish needed a touring vocalist in 2012, she has stepped up to the plate and delivered. While still up in the air regarding her ‘permanence’ with the Finnish act, Jansen continues forward with her own symphonic/ gothic metal band ReVamp and the sextet’s second studio platter Wild Card.

Stylistically ReVamp fall into similar lines as her previous work with After Forever and the current work of Epica and Delain, with occasional nods to a heavier Arch Enemy down-tuned guitar stance. The songwriting is crisp, Jansen’s melodies caressing with a semi-operatic meets angelic delivery, and guitarists Arjan Rijnen and Jord Otto feel comfortable fluctuating between some groovier parts amidst the bombast for “The Anatomy of a Nervous Breakdown- The Limbic System” and then just charge with steamroller abandon against the changing atmospheric tides for “I Can Become.”

Europeans can’t get enough of this style, so it shouldn’t be a surprise that it filters back into North America with the release of more albums and bands. Wild Card has far reaching appeal, as I believe the keyboard to guitar balance is a fair see-saw battle for air time and the sextet perform with versatile intent- keeping things heavy, moody, and adventurous in a solid songwriting context.