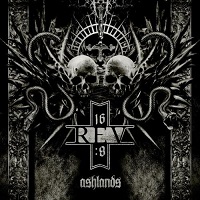 Not the usual fare typically released by AFM Records (read: these guys would scare the label’s melodic rock contingent), Sweden’s Rev 16:8 emerge as the label’s most extreme act, with Ashlands being a black metal album of predictable proportions. Falling in line with the likes of countrymen Dark Funeral and Marduk, Rev 16:8 evoke the blast-happy, well-produced brand of black metal that when performed without any type of variation or dynamics, can get stale pretty quickly. Ashlands gets pretty close to that point.

that is fitting of its title. The band’s riff choices follow the black metal playbook note-for-note, with the ample of amount of speed-picking, dissonant chord choices, and the occasional eerie, dingy portion to follow to break things up. This doesn’t stop “Blackline Sundown” from putting its head to the grindstone and kicking up some dust; same for “Serenade,” where a flurry of Dark Funeral-like riff selections keep the pace high and off the charts.

Attempts at breaking up the album’s flow come and go with “A Study of Patterns and Habits” and “The Chase” doing their best to stray from the constant blasting via an atmospheric interlude (“A Study of Patterns and Habits”) and black ‘n’ roll (“The Chase”), but Ashlands is unable to overcome its own deficiencies. By-the-book black metal this is, and albums as such are usually as forgotten in a blast-beat nanosecond.