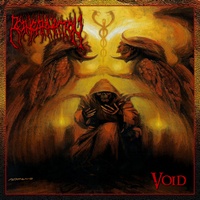 Reincarnation was a brutal death metal act hailing from Spain back in the 1990s. If you were to hear it blindly though, Spain wouldn’t be your first guess so much as New York. Reincarnation owes much of their material to that of Suffocation’s Effigy of the Forgotten, alongside other early bands such as Internal Bleeding. In fact, if you enjoy either band, this is basically a dead-ringer for it.

Reincarnation falls into that third tier of brutal death metal that started to erupt around that time. Due to the similarities to the afore-mentioned bands, it seems that’s the most likely reason that the band never really broke through, essentially folding in not too long after 1997’s Void (originally released on Repulse Records). Though the status of “active” on Metal Archives may indicate why Xtreem Music has taken an interest in re-issuing this one. As described above, there’s not much that pushes the band out of early Suffocation material, with a slight smattering of Cannibal Corpse (especially on the Seed of Hate MCD) to differentiate. It’s massively brutal, just technical enough for the times, and full of guttural roars – but it’s almost entirely devoid of any originality. In other words, it’s entertaining for a few listens but after that, it’s onto the next fix.

For anyone potentially scouring the Internet for Reincarnation material, this re-issue basically hits the jackpot. Alongside Void, the Seed of Hate MCD is here as well as some live tracks (with somewhat iffy sound quality, but hey it was 1998) and a one song promo track (“Hell over Hell,” also from 1998). Sure to please longtime fans who may have been missing something from their collection, it’s unclear the value of this one to anyone outside of that small market.