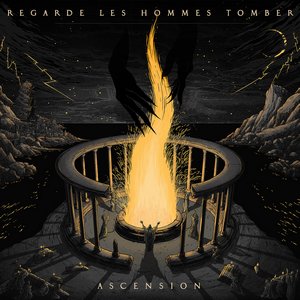 Dark times call for dark sounds and this spiritual cousin of The Great Old Ones scratches a more existential itch befitting the plague reality we now occupy. There isn’t a dramatic departure from previous works by the group, Exile having received significant play from yours truly several years ago, but instead is a refinement with a much greater emphasis on a full sound. Behind that fuller sound, however, is a fairly monotonous construction and Ascension blends together as an experience.

A blackened sludge amalgam remains the band’s focus, though this time around there is a greater focus on blastbeat-backed sprints through lands of anxiety and terror (“The Renegade Son”). The sprint isn’t the only focus here, as the experience does slow to a dense simmer toward the end of centerpiece “The Crowning”, and it takes on a suffocating darkness as it grinds out its conclusion. “Stellar Cross” stands apart – it works in reverse to many of the songs here, involving moan-like clean vocals and getting more intense over the course of its length. There is a strong post element to the track but it is cleanly (and sparingly) used.

Interlude “La Tenatation” serves as a likely elaborate introduction to closer “Au Bord Du Gouffre”, which is the strongest song here, the most varied, and structurally borrows the most from The Great Old Ones playbook – abyssal proximity brings the best from all hands, it seems. Ascension is a solid experience but a listen that takes a few rounds to settle in as the song with the most immediacy is the closer and the structural and sound similarities between the other songs mean they tend to bleed together during a casual listen. This isn’t an issue unique to Regarde Les Hommes Tomber, of course, as many bands that ply the sludge-adjacent world tend the same.

Time is something that many should have now, however, so as we push further into our own abysses under the shadow of Covid-19, Ascension may be your ideal mate.