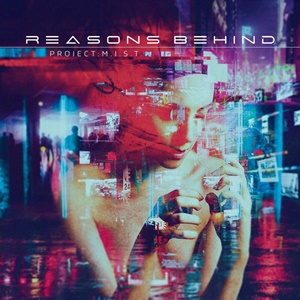 Marrying modern metal with symphonic and dance/dubstep music, Italian act Reasons Behind have evolved since their start in 2010. Signing with Scarlet Records, their second full-length Project M.I.S.T. comes six years after their debut The Alpha Memory – containing a new rhythm section in the interim with bassist Michele Cavalca and drummer Andrea Gardani joining the founders guitarist/keyboardist Gabriele Sapori and vocalist Elisa Bonafé. There is danger in the waters if one specific element/style overrides the others, and after numerous spins it’s apparent that Reasons Behind are still going through some growing pains to reach that distinct measure of their own take on things.

Many songs contain larger than life multi-part vocal harmonies out of Elisa that peppered against the trance/dance-oriented keyboard parts make the listener want to jump up and groove to the energy of “Beyond the Black” or “Fireflies in the Wind”. Elisa has a very peppy, pop-like nature to her delivery, when she doubles up during specific verse lines or those majestic choruses, the ABBA-ish melodies come flooding to your headspace. The other musicians often drive home transitions with a bit of that modern/symphonic metal charm, “A Hidden Thread” and “Binary Stars” containing the drive and push pull that put Amaranthe to the stratosphere for worldwide appeal during The Nexus/Massive Addictive album periods. At eleven tracks and 35 minutes, Reasons Behind focus intently on getting to the hooks early, driving them home, and moving on to the next idea – risking little ear fatigue in the process. The synthetic / digital nature to the production keeps things leaning more on the dance side and less on the metal platform – which could be a bone of contention for overall appeal, as it seems the band is going for the cyber/dubstep aspects a little more on this go around than in the past.

Project M.I.S.T. isn’t a badly executed album by any means – it’s just that you wish there were more times where the keyboards would take a bit more of a back seat and let the natural metal influences flow a bit more. This scribe is sure that album three will steady the ship for what direction Reasons Behind champion most.