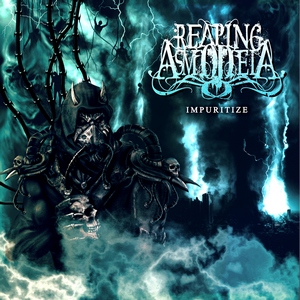 The name of the game in the last few years has really shifted into how much cross-pollination a band can handle while drafting a cohesive product. Hit has many of those genre tags as possible without missing the point behind including them in the first place. There’s been some success and failures in this regard, and Minnesota’s Reaping Asmodeia find themselves on the winning side of the balance with their second album, Impuritize.

Engulfing and utilizing a wide swath of death metal influences, it’s easiest to claim the band under that modern death metal category. Frantic speed runs with a technical edge, intricate melodies, heavy grooves, searing brutality, and yes, even some breakdowns all fit into the band’s mantra. While some may look at the description and see chaos and the potential for disjointed songwriting, Impuritize impresses with the way that these elements are effectively blended into a seamless product. “Defenestration” contains grin-inducing technical yet melodic guitar fireworks only to switch into an intense groove and later accelerate towards faster ones with nary a moment for the listener to catch their breath. That in turn, is the strongest component of the album – the relentless drilling of riffs while keeping a semblance of order and ear for subtle melody. “Collage of Toxins” shows this same promise later on in the album, pushing modern grooves with nuanced melodies, as does the bouncy bass rumblings of the closer, “Ritual of Ignorance.”

Using a large bag of varied death metal influences, Reaping Asmodeia succeed in making something that retains the brutality necessary while keeping the mind engaged. It may knock the wind out of your sails, but it will stay fresh with repeated samplings – proof of the band’s potential to become larger names in the scene with material to come.