Reaper – Anthems of the Cursed (Self-Released) 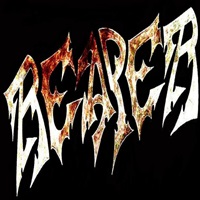 Hailing from the Westchester/Putnam NY area, Reaper are a quartet that since 2013 aim to bring the fast, aggressive spirit of melodic power metal to the masses. Their debut EP Anthems of the Cursed contains 4 songs of a style rarely explored in the American underground these days: musicianship on high, fiery power riffs, galloping bass, complementary pounding tempos and soaring falsettos and multi-octave vocal prowess to bring the whole entity home.

A lot of the riffing has a neo-classical meets power/progressive slant – guitarist Mario Consolo certainly a lover of Yngwie Malmsteen and Michael Romeo, if thrown through more of an Andy LaRocque meets Jon Schaffer slant on the gallop/triplet infused “Lycan Sins” or Iced Earth-ish opener “Transylvanian Quest”. Vocalist Tommy Santangelo can really launch into the upper stratosphere – King Diamond and Geoff Tate would be proud, as well as Deadly Blessing’s Ski as the man makes hairs stand on edge and probably shatters glass through his sustained falsettos. Jaymz Delisle and Tye Kessler as bassist and drummer know when to accent the faster parts with power and then lay back at times to keep the proceedings a tough more in the groove – check out “It’s Alive” for both aspects of their entertaining see-saw fusion.

A lot of tremolo action gives the seven minute plus “Buried in the Sand” more of an exotic nuance, probably one of Tommy’s best front to back performances on the recording as he uses all facets of his low to high lung capacity – the masters would be proud of his tools. Ardent followers of the power scene will notice that Reaper have a lot of love and respect for their 80’s and 90’s bands – Anthems of the Cursed has broad appeal if names like Helstar, Jag Panzer, and the aforementioned artists sprinkled about perk your ears and cause you to stand up and shout.

A very promising start to their career, foreign markets such as Germany, Greece, and the Far East will react positively to Reaper’s energetic platform – and hopefully many in their home territory too.