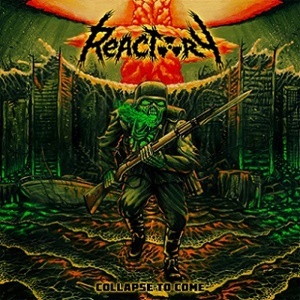 Forming in 2010, Reactory are a Berlin quartet who shock and awe through their speedy brand of thrash. Setting themselves apart due to the versatility of performing in doom, punk, rock, and power violence acts over the years, there’s always been a return to the heart of thrash – releasing a demo, EP, and two full-lengths since their start. Collapse to Come is the third full-length, a nine-song affair that keeps things fast and furious, even when the band temper things in controllable waves the listener can tell the material bursts with an unbridled sense of expressive energy that’s savage.

It’s evident that Teutonic heroes like Sodom and Destruction factor in as much as the Bay Area veterans like Exodus or Slayer when it comes to the vicious riffs, thick hooks, and brutality in the vocals. The two- fisted opening salvo “Space Hex” and “Speedboat Piracy” illustrate Reactory’s penchant for relentless intensity on all fronts, the evil licks and uppity tempos along with gang-fueled choruses running rampant to raise adrenaline levels through the roof. Jerome ‘Jerry’ Düren lays down a mixture of thrash/death crossover guitar mechanics, keeping things crunchy and tight during “Drone Commander” while joining a gallop parade with bassist Ulli Hoffmann for “Born From Sorrow”, the stairstep-like action similar to classic Death Angel colliding head first into Destruction during their Release from Agony era. It’ll be hard for even the novices not to create circle pits or headbanging unison moments by the time “Enemy” concludes the proceedings – vocalist Hans Hornung barking out his words like military leader possessed, feeling the ‘flesh tearing from the bone’.

Tight and tidy at less than thirty-four minutes, Collapse to Come isn’t aiming to set the thrash world on fire with something new or innovative. Reactory prefer to be one of those old-school bands who live for the classic template and just figure out a way to maneuver into those crevices for delight – and overall do a satisfactory job of entertaining through raw passion and persistence.