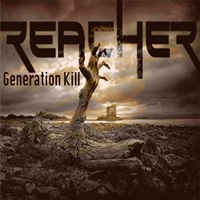 What often begins as a studio project can evolve into a full-fledge active outfit – as the case is here for UK thrash quartet Reacher. Their debut album Generation Kill is a 12 song affair, chock full of a lot more musicianship and melody in both the vocal and instrumental departments which puts them in rarified company for an upstart. Never stuck in pure up-tempo speed mode allows the listener to appreciate the versatility, as the guitars, bass, and drums often weave more classic power magic that gives off more of a Metal Church or Heathen influence.

Thunderous double bass parts appear in synchronicity to slower guitar harmonies for “False Gods”, while mystical chord progressions and a steady groove comes up for “Evil in This Land” – a song that has a lot of that old school Metallica finesse and impeccable timing as the rhythms cement deep for maximum head banging appreciation. Occasional narrative samples heighten the senses during “Insane Like You”, while a longer track such as the 7:36 “Invaders” opens up the shredding and tapping horizons for guitarist Anthony Difford as he’s afforded a longer break and a bevy of harmonic tricks to stir up adrenaline and maintain brain engagement.

Vocalist Sy Davies has a killer multi-octave range, able to wrap his tongue around speedier verses through “Cybernectica” while also having resolute conviction through a more commercial-oriented power anthem such as the follow up “London’s Burning”. Images of everything from Bruce Dickinson and Mark Osegueda (Death Angel) to Eric A.K. (Flotsam and Jetsam) come to mind – truly a difference-maker against all the screamers and growlers who you can cut and paste into this style as of late. The production is crisp and clear while also maintaining that bite necessary for melodic power/thrash to win over even the cynics – as I’d hazard to say a lot of chanting, crowd surfing, or pit action takes places when taking these songs to club or festival stages.

Reacher has all the ability, songwriting, and talent to go places – especially with Sy helming the microphone. Those into the power side of thrash with plenty of melody will love Generation Kill.