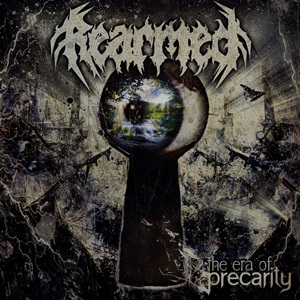 Active since 2001, Re-Armed recorded six demos from 2002-2008 before Massacre Records picked them up for their Worldwide Hypnotize debut album in 2012 – proof that slow and steady progress can still win acclaim over immediate buzzworthy impact in the metal scene. Delving into the conceptual full-length theme for album three on their latest label Saarni, this Finnish quintet boldly tackles future scenarios in global politics to deliver a dystopian world that people would not want to live in for The Era of Precarity. Heady stuff to ponder, indeed. Straddling the death/thrash genres while adding in elements of black, stoner, and even classic passages, you gain sonic output that remains crushing while diverse to prevent brain fatigue.

Two of the twelve tracks for instance get in and get out in under 90 seconds – the opener “Novus Ordo Seclorum” being more of an atmospheric instrumental opener featuring swirling keyboards against a clean to thunderous electric musical cocktail, while midway through “Three-Headed Beast” roars in The Haunted meets At the Gates thrashing/melodic death intensity on a blasting mission, all the while Jouni Matilainen roars the words at breakneck bullet train speed. Bluesy/ stoner guitar lines pop up during the instrumental break for the otherwise mid-tempo groovy death-oriented “Evolve Cycle”, as bassist Juhana Heinonen gains a spotlight segment to darken the proceedings. The rhythmic propulsion between guitars and drums often gives a particular song that extra power to send body shivers, as “Through the Barricades” is one of the standouts, the guitar work from Jussi Venäläinen and Mika Oinonen sharp and technical when necessary, classic and crunch as well.

Keeping these songs moving along at a three to five-minute clip for the most part with a quick channel changing ending for each cut, Re-Armed don’t re-invent the death/thrash wheel so much as churn along in a comfort zone of heaviness, speed, and mid-tempo transitions along with the acidic growls and discernible screams that keep the band firmly in the down-to-earth trenches. The Coroner-ish vocal delivery on “Purification” with a line like ‘this is the last time you will see the stars’ paints future Armageddon as the best death/thrash should – and at this point in Re-Armed’s career, The Era of Precarity delivers pounding music with the right groove and hook elements, making it a very satisfying effort. 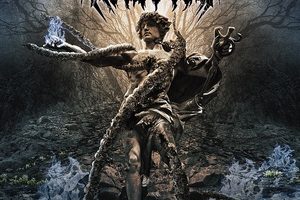 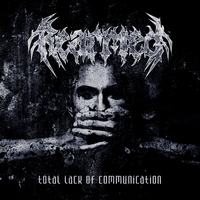