Ravened – From the Depths (Jono Music) 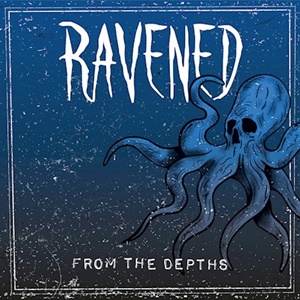 Merging modern metal and older groove/thrash influences, Swedish band Ravened are a relatively younger bunch of musicians (age range 19-24) – but they have family ties to other metal musicians to draw upon for insight and inspiration. Guitarist Olle Liljegren is the nephew of Narnia’s Christian Liljegren, and drummer Oliwer Svensson is the son of Hellfueled’s Kent Svensson – providing that stable understanding and drive necessary to launch a group from the ground up. Two years after formation, From the Depths as their debut full-length delivers a potent riff to hook ratio along with the right aggression and temperament to provide ample entertainment to those who crave songwriting that forces spasmodic body convulsions.

The jumpy rhythmic nature to the riff patrol Olle and second guitarist Willy Eriksson deliver sits in that Gojira/Pantera meets Metallica circa 90’s black album territory – you’d be hard pressed not to move when hearing the main hooks and transitions for “Foul Deeds” as well as the mid-tempo rumbling “False Conjunction”. The occasional off-time musical interplay between rhythm section and guitarists gives off that djent vibe, but it’s never overpowering as Ravened is conscientious of keeping the chord progressions and ideas flowing along in a logical, constructive manner – “Blackened One” an early example of neck breaking staccato-driven low energy building out to an explosive chorus. The venomous bellow of singer Isac Wendel has all the vigor of Randy Blythe and Jens Kidman rolled into one – busting chops and taking names later during “The Cunning” while serving a desperate contradiction to the doomier atmosphere of the seven-minute epic “Denial”. Grand church organ accents open “Personal Universe”, another sparkling second half highlight that has some melodic death/triplet-rhythms and groovy half-time transitions sure to raise adrenaline levels. The only oddball quirk to these eyes is the skull-oriented octopus in purple hues for the cover – not exactly setting things up for the harsher proceedings on display.

Ravened at this point in their development aren’t exactly blazing a new trail in the metal spectrum – and they are aware that it will take a little while to hit upon their own formula as seasoning, touring, and experience factor into the mix. But for a first record, From the Depths showcases enormous potential as well as solid first-rate mechanics and tones – keep an eye out if you love modern groove/thrash offerings.