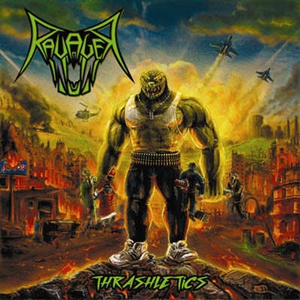 There’s little question what genre German act Ravager belong to based on this album title, eh? Forming in late 2014 and issuing their first EP Alarm Clock Terror in 2016, they signed with Iron Shield shortly thereafter who released their debut album Eradicate…Annihilate…Exterminate the following year. Ready to up their sporting prowess for album two, Thrashletics not only invents a new term, but subscribes to a healthy dose of stop/start, gang-infused energy that should satiate most headbangers looking to circle pit, stagedive, or imbibe in their favored beverages.

Incorporating some traditional and power elements at times against their penchant for all-out speed assaults allows Ravager the chance to prove they aren’t out for sheer destruction in these songs. You’ll understand once hearing “Mindblender” and “Pit Stop…Don’t Stop in the Pit!” that this five-piece bludgeon through deadly riffs, non-stop snare/kick activities and an equally maniacal rapid-fire word spew that contains a bevy of Nuclear Assault, Slayer, and Warbringer influences – but when necessary, can turn in some reflective, clean passages and musically enticing activities. The longest track “Slaughter of Innocents” at almost nine-minutes incorporates narrative news footage and twin guitar accents from Marcel Lehr and Dario Rosenberg as well as an instrumental break during the midway point that molds the best of Metallica and Iron Maiden. Stairstep neck maneuvers and nifty tempo changes allow “Thrashletics (Out of Hell)” to stew organically (featuring an assist from Dew-Scented crooner Leif Jensen), while “Kill for Nothing” chugs along at that Beneath the Remains-period Sepultura catapult, the shifting gears and Philip Herbst venomous hoarse roar volleying against the ‘Kill…Die’ gang unison activities. The cover art has a bit of a Laaz Rockit /cartoonish feel, but you gotta love the back and forth R look of the logo – probably making their brand that much more killer when it comes to merchandising and branding.

Thrash is here to stay folks – we are on wave three at this point, where parents are introducing their offspring to the best in the genre, and they in turn are discovering younger bands who put their own take on things. Ravager probably won’t reach upper echelon as far as small theater headline status – but with Thrashletics can certainly whip up a frenzy, and that’s all most hope for in this style.