Rattlehead – Tales From the Gutter (Self-Released) 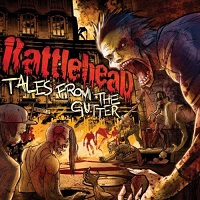 The second generation of thrash seems to have as much impact on audiences worldwide as the first one I grew up savoring. As long as the passion and talent focus on the songwriting and less about writing ‘pit’ riffs or concern for what you are wearing, I’m all for more quality head banging all around. The brainchild of rhythm guitarist/ vocalist Nick Baranov, Rattlehead started in 2003 from the gutters of Hollywood and have their second independent release on the streets, a 10 song effort that captures a hungry band ready to make a case for gaining their foothold in the thrash sweepstakes.

Musically, this four-piece have a lot in common with Sacred Reich, Defiance and possibly Intruder with songs like “Nightmares Never Sleep” or “Love Song (Bleach Bath).” Things get a touch more technical in the sweeping guitar riffs and solos for the epic 7:27 “The Losing Hand”, with the main riff not that dissimilar to what one would expect from Metallica circa Kill ‘Em All.

Where they lose their appeal slightly for me is Baranov’s delivery. His voice sounds like a montage between Tommy Victor and Phil Rind, expect suffering from severe congestion in his head. When the band plunges ahead at breakneck speed like personal favorite “Digging My Own Grave” with its Iron Maiden-like bridge changes his vocals are much more tolerable.

Pluses include the natural snare snap tone of AJ Stixxx and the ability for Rattlehead to mix up the tempo dynamics from song to song- which makes Tales From The Gutter sound like a well rounded album and not just riff-o-rama cut and paste arrangements.