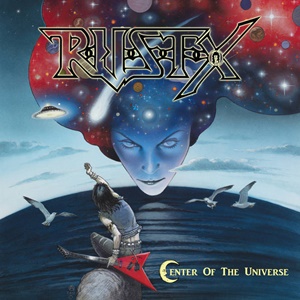 Originally known as Flames in Ice in 2003, Cyprus band R.U.S.T.X have been a live staple ever since – opening performances for acts like Omen, Ross the Boss, and Bonfire as well as performing at festivals like Up the Hammers and Rock You to Hell. They’ve released demos, singles, EP’s and two full-lengths in their career – setting the stage for their third full-length Center of the Universe. The animation style cover art featuring the sea, birds, a UFO, and a guitarist looking up to the sky at this female staring across the universe definitely paints an intriguing insight into the band’s heavy metal platform – so let’s see if the first impression visually stands the test through these ears.

The eight main songs for the record (the two bonus cuts are CD format only) are cut from an older, traditional 70’s/80’s-oriented cloth, where bands like UFO, Rainbow, Riot, Judas Priest, and Iron Maiden ruled the public’s attention for hard rock/metal. You can expect simplified choruses with call and response-oriented background enhancement, catchy hooks on the musical front, and loads of melody/harmony sections between the instruments to up the retention factor. The keyboards and guitars form a tandem foundation for rich riffs and playful interplay – right out of the gate on “Defendre Le Rock” in a Deep Purple meets Rainbow way, and continuing in more of a power metal, double kick manner for the follow-up “Running Man”. Considering all four musicians contribute vocals, the possibilities of versatility are endless – you’ll get bluesy deliveries just as easily as high-pitched harmonies and melodies, and it’s this high-quality edge that keeps songs like “Widow’s Cry” and the 80’s-style mid-tempo “I Stand to Live” as highlights especially because of the tough and multi-octave prowess of keyboardist Katerina Xanthou. Although most of the songs are compact and radio-friendly for arrangements, the title track is a nine-minute epic featuring supplementary nature sounds, an atmospheric/vocally hypnotic opening, and an ever evolving, storytelling/dramatic nature that is very progressive, combining the feel of Yes/Jethro Tull with a calmer early Judas Priest aspect.

One of the bonus cuts is “Band on the Run” – a cover of Paul McCartney & Wings classic track from the 70’s, and done very tastefully with a bit of a heavier take on the guitars, the harmonies and engaging twists perfect for R.U.S.T.X to handle. Center of the Universe may not necessarily be a rip-roaring favorite for the younger generation, but this is a record for those who want more of that traditional hard rock/metal sound of the 70’s/80’s and don’t hear much these days in newer artists.