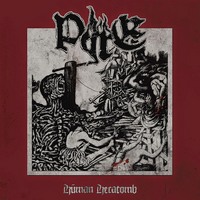 If you had no prior knowledge about Pyre and their geographic location, Russia would not be your first guess when you hit the play button on Human Hecatomb. Nope, chances are pretty high (damn near 100% actually) that you’d guess Sweden. That’s right, Pyre are the next to float to the surface in the seemingly ever-flowing stream of retro-death metal.

Geographic location aside, what makes Pyre stand out in the overly saturated retro-death movement? Not much really. The sound has Sunlight Studios written all over it, from the classic buzzsaw crunch of the guitars to the clunking of the drums. You wouldn’t bat an eye if you were told that this was a re-issue of an unearthed ‘90s classic (ditto for the artwork). Kudos though for tossing some audible bass once in a while (see the opening of “Merciless Disease”). What does keep Pyre ever so slightly above some of their brothers in arms is the fact that these tunes, despite their familiarity, really work. As previously mentioned, it sounds like a classic, not a second-tier offering. Pyre knows how to roll with the driving riffs (“Far Beyond the Unknown”) and melodic soloing and leads. The grooves are infectious (“Under the Death Reign”) and they aren’t afraid to slow down the pace either (“Possessed”).

If you haven’t had your fill of ‘90s death metal yet, Pyre do a good job of representing the scene, even though they don’t hail from where you may expect. They can’t all be originators, and Human Hecatomb does a good job of filling its niche role.