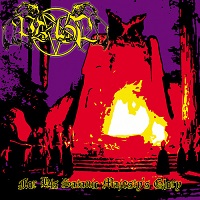 that you know, can actually write), but certain styles of metal lend to it sounding a certain way. Certainly the early works of Bathory and Venom wouldn’t have the same charm if they sounded pristine and lean, while the monstrously brutal modern day efforts of Cannibal Corpse and Behemoth probably wouldn’t land as well if they didn’t have the crystalline production jobs they possess. In the case of Fort Wayne, IN’s Ptahil, their ability to weave an evil atmosphere into their sound is ultimately what makes their second album For His Satanic Majesty’s Glory a winner.

Comprised of two members (J. Mhaghnuis, vocals/drums; Luathca guitars/bass), Ptahil captures the essence of early black and death metal quite well on this nine-song affair. Across the board, the pair delivers several body blows via the crusty surge of opener “The Great Satan,” and haunting doom cadence of “The Black Fire.” These measures are furthered by a natural and thorny recording sound that essentially embodies the early 90’s to near-perfection. Therefore, the band’s obvious Satanic chants and penchant for malevolent slabs of black/death (“The Black Flag of Total Death” is probably the best example of this) are made all the more believable and acceptable.

An engaging, relatively dastardly display of pure American black/death metal, Ptahil’s For His Satanic Majesty’s Glory is the type of album that would easily find a home

on a label like Moribund or Agonia. That could eventually be the case, as this Midwestern duo has a lot of promise…and evil in them.