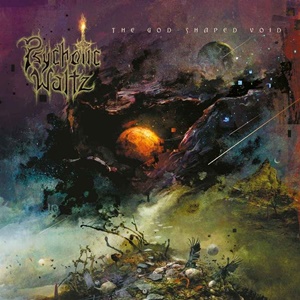 During the band’s original incarnation of the 1980’s/1990’s, Psychotic Waltz gained acclaim overseas for their innovative take in the progressive metal genre, but struggled to attain a foothold in their homeland where glam, grunge, and alternative/nu-metal factions developed commercial inroads. Since their 2010 reunion shows, the band has kept in touch – finally issuing their fifth studio record The God-Shaped Void, their first album of new music since 1996’s Bleeding. With the main five musicians still intact, where will they take their creative ideas and two decade plus layoff musically?

One of the hallmarks of the band has been their ability to separate themselves album to album from the pack – going where their muse flows so to speak. Within these ten tracks, there’s more of a mysterious ambiance and slower/mid-tempo nature to the majority of this record – exploring those grey crevices when building momentum, atmosphere, and dynamic tension invites heightened sensory development. The layering of guitars between Dan Rock and Brian McAlpin promotes stunning sonic moments – right out of the gate for “Devils and Angels” on through to the acoustic/electric throwback calmness that takes “Demystified” into a modern-day equivalent to The Beatles meeting Pink Floyd in an alluring metal context, including breath taking flute passages. Devon Graves’ vocals mesmerize – molding his melodies in a shape shifting manner that maintains multiple characters from psychedelic to progressive rock as well as metal. Check out his measured verses and outer universe confidence for “Stranded”, while the almost seven-minute “Sisters of the Dawn” contains a low, forceful melodic sarcasm that transforms into majestic grace, using multi-part harmonies to bone chilling effect. It’s as if the band has taken the last two albums Mosquito and Bleeding to full advantage with today’s production and mixing/mastering values – as Ulrich Wild and Jens Bogren are consummate professionals in taking the Psychotic Waltz sound to another dimension in terms of tones and contrasts from calmness to heaviness.

Favorites change by the day. “The Fallen” producing those goose bump moments right out of the gate through another killer Buddy vocal performance against the acoustic guitars and subtle Ward Evans/Norman Leggio rhythm section groove mechanics, only to shift into this deep electric ballad with a Queensrÿche-like crescendo conclusion, while “Back to Black” is probably the heaviest song for the album, it’s main riff and tempo very straightforward to remind people of the PW from the early days. The God-Shaped Void never tarnishes the credibility and vitality of the band – and will be a record studied, debated, and dissected for quite some time.