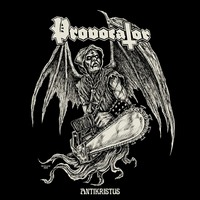 Following the cult or “kvlt” trend, Slovenia’s Provocator profusely use every standard that’s needed to fit in with this ongoing wave of contemporary kvlt black metal. Blasphemous and profane imagery, check. Crude and rude sound, check. Grease paint, check. They walk the walk, talk the talk and all that other jazz, but do they impress? Sure they impress, they impress their friends at least. But, who’s to say? Perhaps they don’t sound very “good” but not every case of black metal is made to. Provocator fix their own form of bestial metal and turn on their preferred temperature of raw.

Song titles don’t get much more eccentrically blasphemous than most of these. Take whatever thou wilt out of “Unholy Rape of the Holy Whore.” And don’t just let Jesus into you, rather, “Let Jesus Fuck You;” a typical enough word device. As far as the song itself, “Let Jesus Fuck You” is one of the shortest and most bizarre intro songs a band could possibly almost not get away with, the title doesn’t even begin to explain why but the whole nine seconds of it says enough. The title song, “Antikristus,” is one with a sluggish doom-like density and probably one of the more pleasant to the ear because of that. “Black Star Lucifer” is on a deeper level than many of the other tracks and one of the most pleasant to the mind with its obscure use of cosmic psychedelia engulfed in a blackened atmosphere.

It seems more and more are forgetting that blasphemy, even in black metal, is not a profanity competition. Of course there’s bound to be provocative obscenity here and there, but maybe some more research would be useful for future song development. Musically speaking, there’s an ample amount of versatility in the instrumental parts but lots of room for a broader (or less restricted) vocal range, fewer moans and more gutturals might be the fix for that. All in all, black metal might not be their fortitude but this work still passes for its boorish expression. Antikristus is a statement that Provocator have some potential.