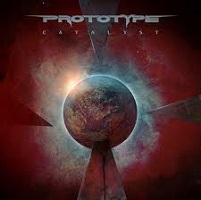 A slow creative process appears to be part and parcel of Prototype’s career. Formed in 1994 by guitarist Kragen Lum and vocalist/guitarist Vince Levalois, the band released their first full length Cloned as a self-release in 1998, and their fourth album Catalyst hits the streets in 2012. The reality is for your favorite independent metal artists, musicians needed full time

jobs to pay the bills, so as a result, albums take that much longer to write, properly record, and assemble all the moving parts.

Regaining drummer Pat McGrath who performed with Prototype from 1997-2002, the quartet (complete with bassist Kirk Scherer) gives the listener an explosive, thrash-tinged progressive metal effort with this 12-track, 63-minute album that adheres to a tight, crunchy philosophy. The tones and contrasts between heads down riffing and ethereal, clean

passages on killer songs like “My Own Deception” (Nevermore meeting late 80’s Bay Area thrash) and darker “Gravity Well” complete with some awesome vocal harmonies allows your brain to take in a lot of information with each successive exposure. Vince’s vocals resonate with those into Warrel Dane’s lower to middle range, sending chills when he holds out trailing verse notes.

Many of these songs clip the six-to-eight minute mark, but Prototype keep the melodic sensibilities in play, be it an echoing refrain, an addictive clean guitar passage or the rhythm section’s balance between the challenging tempo duty and maintaining a pulsating groove. Occasionally veering into staccato/Pantera squeal land for “The Ageless Heart of Memory” is acceptable when the thick Iced Earth/Forbidden riffs and spirited solo work make me want to throw up the devil’s horns in admiration.

Kragen also maintains axe duties for the criminally underrated Heathen, so one hopes the productivity keeps moving forward no matter how long the wait for a future Prototype album. Those who look for the darker, meatier side of progressive metal with thrash and Nevermore power will love Catalyst.