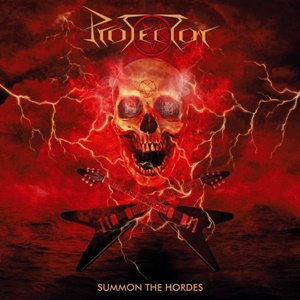 An 80’s band that straddled thrash/death lines, Protector were a part of the German underground scene that through tape trading built a following, issuing a series of demos/live tapes before their debut full-length Golem in 1988. Pretty much relegated to German/European labels, they signed with High Roller earlier this decade and are now up to album seven for Summon the Hordes. Vocalist Martin Missy is the lone member left from the early years – but it hasn’t stopped his determination with the current quartet to unleash his fury in another ten-track outing that is raw, abrasive, and meant to tear you apart.

The acidic, frantic speed and relentless nature to the proceedings puts Protector right on that thrash/death see-saw, as you’ll have semi-blast beats, savage screams, and buzzsaw guitar/bass action throughout these cuts. When the band chooses to go faster, the punk edginess comes to the forefront against a relentless double bass barrage for “Three Legions” or the under two-minute closer “Glove of Love”. At other points, the guitar riffing and pacing possess obvious similarities to coveted thrash classics – how the band cannot know the main parts and atmosphere of “The Celtic Hammer” resembles “For Whom the Bell Tolls” by Metallica is beyond this scribe. It’s as if the band took a healthy dose of early Sodom, Slayer and Kreator, added a dash of Death/Master, and made Protector what it is today. The snare sound and penetrating brutality from Carl-Gustav Karlsson as a drummer makes “Stillwell Avenue” and “Realm of Crime” early highlights, allowing the churning guitars to slice and dice as they should on a thrash record. When the band chooses to settle into a slower movement, that’s where some of the melodic harmony elements come into focus – “Two Ton Behemoth” teetering between hyperspeed and those mid-tempo parts that cause body launching or crowd surfing if the numbers are right. Martin has this outer dimension scream/snarl delivery, as if the man recorded his vocals from the grave (or in a cave). It’s the ideal fit against the primal tones and 80’s-oriented punch, as most of this sounds very live production-wise.

Keeping the record at a tidy, vinyl consumption length for 38 minutes, Summon the Hordes has the most appeal for those over 40, who did remember compilation tapes and seeking out whatever was out there for demo tapes as you grew your metal collection anyhow, anyway. Adequate, but not outstanding.