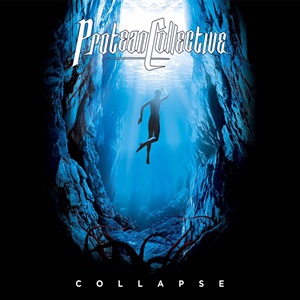 Melding together and eclectic progressive metal environment influence-wise, Boston’s Protean Collective make an immediate impression – they certainly mesmerized this scribe when watching the band open for Ghost Ship Octavius last year in western Massachusetts. With two albums and an EP sandwiched in between under their belts, the third full-length Collapse serves up 10 tracks of intoxicating arrangements, forward thinking progressive metal that can be heavy at times, intricate in spots, but always taking into consideration dynamics and hooks for consistent and pleasurable audio engagement.

The diversity injects versatility in the way the quartet approach songwriting and idea development – often the progressive passages come out in small bursts, while still maintaining a cohesive main riff or tempo/groove that won’t lose listeners in sidestep, mathematical madness. Drummer Matt Zappa possesses a metal/rock foundation with jazzy/off-beat fill tastefulness – check out his quick, fleet of hand/feet maneuvers for the 2:07-2:20 instrumental break of “You & I” which then feeds into steady double bass against a mid-tempo snare swing. Often the low-tuned guitar action signals a modern charge, but can quickly turn into a left field atmosphere curve ball – the first two parts on “Myopic” the best example as things move from Evergrey/Meshuggah-oriented heaviness to an open, clean and spacious verse more in line with say Porcupine Tree or even latter day The Beatles. Guitarists Steph Goyer and Graham Bacher align perfectly to set the stage through their foundational work, intertwining and covering counterpoint aspects or teaming up when necessary to make “Chained” and the Dream Theater-esque “The Drought” two relevant pieces of their exemplary capabilities. It’s rare to hear a band inject the right djent/modern staccato feel while still being progressive and not overbearing when it comes to technical prowess – so credit Protean Collective for their efforts to hone in on making their material catchy in palatable four to six-minute time frames for over two-thirds of the album.

The ace in the hole beyond the professional production and mixing/mastering (Kyle Paradis + the band themselves for the former, André Alvinzi/ Jens Bogren of Fascination Studios for the latter) is the alluring, lower register/alternative melodies employed from Graham Bacher on the vocal front. Along with proper background support from Steph and bassist Dan Ehramjian, Graham’s voice comes from a comforting perspective – soothing and calmer against the push and pull of the musical compositions. It’s often what probably keeps people coming back to Protean Collective for more – almost radio friendly in that late 80’s/early 90’s alternative rock marketplace, but with an added sense of depth and emotional connection. The chorus to “Dead Ends” and the calmer, restrained feel for “Chained” make these two songs that deserve broader commercial appeal, for all the right reasons.

Comparing Protean Collective to any one specific act is impossible – they have the interplay and connections that make people love everything from Rush to Dream Theater, Pain of Salvation to Porcupine Tree, Three to Meshuggah, and others. Collapse thrives because of the diversity, execution, hooks, and musicianship all tied into standout songs – so all who love progressive metal and progressive rock need to hear this.