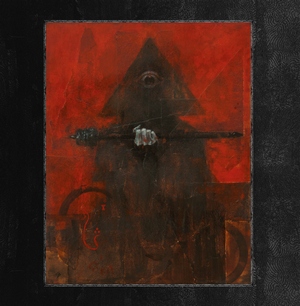 Christbutcher, probably best known for his work with Finnish act Maveth, needed a new deathly vehicle after said act was finished. Enter Proscription, an even darker death metal entity with some blackened moments that enter the mix as well. Conduit is the band’s first full-length, and should have the eager attention of those who enjoy acts who carry the older aesthetics without feeling particularly tethered by them.

Proscription does have a certain sonic similarity to the big “I” bands of this sound (Incantation and Immolation), but they don’t simply tread in regurgitating it to the best of their ability. While the violent and gritty death metal sound is rooted in that cavernous notion, some moments of more murky Finnish melody and blackened vibes (such as some tremolo riffing) keep them a distance from copycat territory. The ‘sound’ itself is right where it needs to be, with a filthy and eerie tone that feels sludgy and oozing, but has enough clarity for those aforementioned melodic touches to pop in the mix. Whether it’s the lumbering and almost doomy opening to “Radiant Midnight” or spooky symphonics that lead into a real bonecrusher of a riff on “To Reveal the Words Without Words,” it keeps things from becoming too one-dimensional to similar in sound despite the somewhat usual range in tempo variations. The ominous roars of Christbutcher further bring the band’s sound into the Abyss, particularly in the slower moments, and have that domineering quality that makes it feel more intense. The raging qualities of the act as the speed accelerates gives it a powerful quality as well, bordering on being unhinged at times (see the faster moments of “Blessed Feast of Black Seth”) but with just enough control to back it all up.

An enticing debut for those that like to wade in the more murky waters of the death metal genre, Conduit revers the old and grotesque ways while making sure to keep things more timely and relevant. Proscription has a solid formula for darkness, and are all but guaranteed to whet the appetite of genre fans.