Prophets of the Apocalypse – Threshold of War (Sliptrick Records) 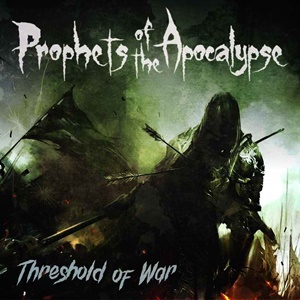 The brainchild of Pete Serro, Prophets of the Apocalypse is a one-man project that assembles numerous underground thrash, death, and blackened influences on this full-length Threshold of War. Previously releasing the War Metal EP last summer, it’s evident that Pete has a fairly productive and prolific creative nature, as these are eleven fresh tracks which tackle topics of battles and warriors of the past: wicked rulers, Valkyries, medieval and epic battles that serve as appropriate stories to blend with the aggressive and volatile musical platform this act puts forth.

It’s obvious that Pete comes from an 80’s/90’s slant with his treasure trove of riffs, accents, and blackened raspy vocals – choosing to be very hook-oriented with his main parts without being overly technical in tracks like “Maze of Doom” and “Hierarchy of Terror”. The man can switch from a love of Slayer and Venom one moment, then Destruction, Abbath, and Coroner the next – along with a bit of Iron Maiden-esque throwback nuances just for good measure. His bass playing has standout moments that pop out against the main rhythm guitar work – check out his adventurous spots for “Burn the Dead” as the tremolo picking and relentless drum programming keeps the energy on high mode. Intertwining shorter and longer arrangements ensures dynamic versatility during the running order – standouts for the quick end include the 2:29 “Shield Maiden” and Coroner-esque “Ancient Wars” instrumental, while the almost eight-minute closer “Skye Ablaze” features a bevy of shape-shifting guitar riffs that include technical arpeggio-laced/jazzy lead breaks and spacious thrash/death maneuvers as the final militant salvo to crush all opponents.

Are there times where you wish Pete would vary the blackened raspy melodies on the vocal front – or dial back a bit of the over the top guitar activities? Sure – but that can also be part of the purity and charm of the record. Threshold of War can be an underground entity that has appeal for multiple groups of metal followers and doesn’t sacrifice integrity or passion in the process.