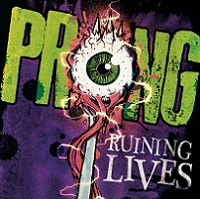 Quietly enjoying a late-career resurgence, understated New York vets Prong have the rare distinction of getting better with each successive post-reunion album. Foregoing the absolute dud that is 2003’s Scorpio Rising, Tommy Victor and friends have rebuilt their turbulent, dance-tilted metal sound in a climate that couldn’t be more dismissive, which in a way, makes Prong all the more appealing of an entity. Their 2012 Carved into Stone had its bounty of jarring, moving-and-groovin’ moments; Ruining Lives goes over and above.

Victor, who seems to be on a better creative level when he’s not wasting his time in Ministry, has fashioned his imitable riff style to retrace the demands of the Prove You Wrong and Cleansing-eras of the band. Indeed some of these ideas make strike the familiar iron a bit too much (e.g. “The Barriers,” “The Book of Change”), and Victor’s singing generally has to stumble before it can crawl (i.e. the title track), but the post-industrial churn of “Turnover” is an instant winner, as is “Self Will Run Riot,” a song that boasts a handful of Victor’s patented riff antics. And to circle back to the man’s vocals, some of the choices on display in “Remove, Separate Self” are hummable, and immediately memorable, to boot.

A worthy addition to Prong’s up-and-down canon, Ruining Lives shows there’s still some street-level spunk to be found in the band’s ranks. And in actuality, the thing is probably more meat and potatoes than we are suggesting; the riffs are burly and heavy, and some well-placed melodies add balance. Even better, they’ve yet to come close to jumping the shark. There’s still plenty of gas in the tank, and yes, we’ll roll-out the cliche: Fingers are still snapping…same with necks. How could one every discuss Prong without making mention of that?