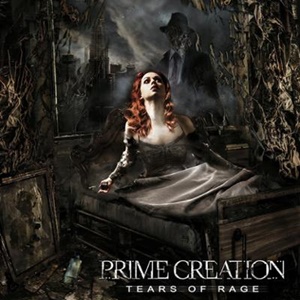 Hailing from Sweden, Prime Creation began in early 2015 as seasoned musicians wishing to express their outlook on modern heavy/power metal. Consisting of members past and present with ties to Morifade and Silverdollar, the quintet released their debut, self-titled album a year later, and now have the follow-up Tears of Rage as second guitarist Rami Tainamo came into the picture in 2017. Considering these musicians and their knowledge of the heavy/power metal genres, it’s not surprising that these aspects also appear on these nine songs – and at the same time, there’s a heavier tone and production aspect that proves Prime Creation wish to gain approval from multiple generations of old school and newer followers.

What’s instantly apparent from the get go is the multi-octave abilities and soaring confidence singer Esa Englund has. The man’s range, his careful phrasing, and proper emphasis on the right notes to glide up and down his register puts him on par with Graham Bonnet during his Rainbow/Alcatrazz prime – check out his melodies and power on highlights such as the Nocturnal Rites-esque “Pretend till the End” or the heavier, semi-epic “A Beggar’s Call”. Rami and fellow guitarist Kim Arnell fill the axe landscape from a crunchy, semi-staccato meets power platform, wielding intriguing combinations that are ear-pleasing and headbanging all the same for “Fingers Crossed” and the marching, Evergrey-like title track. The occasional groovy rhythm section mechanics keep Prime Creation locked in step, opening up Kim’s abilities to shred and flash a bit of his technical prowess – overall the band preferring to keep most of their ideas focused and intent on driving home the hooks/melodies in a catchy, retainable format. Swirls of sound effects with supplemental keyboard/orchestration set up the closing ballad “Endless Lanes”, another tour de force for Esa vocally and an appropriate ending to a rather tight record that doesn’t overstay it’s welcome at 42 minutes.

Prime Creation come from a European melodic /power metal framework and execute it to the hilt on Tears of Rage. If you are familiar with albums like Afterlife by Nocturnal Rites, the early 2000’s output of Evergrey, and other offshoots like Masterplan than this is a must-buy.