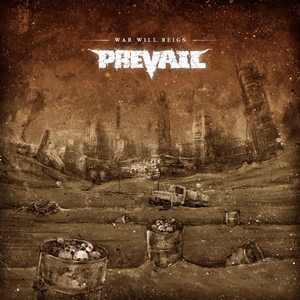 What happens when you take old school death metal and give it a production that takes things up to the 2016 level? Chances are you will end up with something that sounds like the output of Danish metallers Prevail. Their debut album, War Will Reign, takes the spirit of the old school and transfers it into a wickedly groovy new body.

Prevail’s biggest strength in turn is their ability to really hook the listener with an endless supply of groove. There’s not a track on War Will Reign that is without at least one ridiculously catchy groove. These groove elements help to carry the band forward like a steamroller from start to finish, with some occasional speed tossed in to change things up and add some fresh adrenaline. The focus on mid-tempo might recall a band like Kataklysm, and like their later albums, there is also some usage of melodies. There’s never a point where you wouldn’t assume Prevail to be a death metal band through and through, but the guitar work is certainly worth noting (see the leads of “Voices”). The melodies stick (see “Betrayer”), and help in constructing some impressive “songs,” instead of pieced together moments. All of this is coated with a production that feels very modern, but doesn’t lose its metallic edge – the guitars have some serious weight to them, a necessity for their groove to be effective.

With the combination of having a more melodic mindset, a keen sense for groove, and a love of traditional death metal through and through, you end up with a product that is rooted in the old but feels new and fresh. War Will Reign may not tread into any new waters, but it’s hard to deny the downright fun grooves and melodies that will have you raising your fist throughout. A strong debut sure to pick up fans of classic death metal.