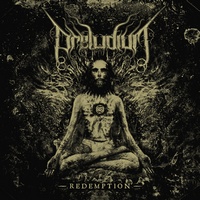 Just as Sweden has it’s key giveaways when you first listen to a band blindly, so does Poland. Preludium, clearly of the Polish ilk, take on the same militant death/black metal of their peers Behemoth, Vader, and Hate. Always pressing forward, bringing forth a soundtrack to armageddon. One piece that separates the band from their brethren, as the cover eloquently alludes to, is the more spiritual aspect (as opposed to the usual Jesus/Satan dime-a-dozen lyrical content providers).

After the oddly placed mid-tempo chugging opener (“Soul Torment,” a song seemingly more suited for later in the disc), things kick into high gear on Redemption. Despite the militant approach, what makes the album work is the subtle doses of melody and atmosphere that infiltrate the ranks. Be it a more of a grinding chug (“Incarnations”), spiraling and frantic riffs (“Sins of Mankind”), or atmospheric leads (“Hatred Breeds Suffering”), let it be known that there is more than just relentless blasting and blistering riffs at play here. Not that some pavement cracking heaviness doesn’t throw some rightful weight around with maximum impact. Massive death metal riffs are on the attack frequently, with “The Seven Gates of Hell” and “Arena of Souls” sporting the war march that Polish bands seem to write effortlessly.

Despite some minor production issues with the drums being a bit too soft in the mix (though a nice change from the onslaughter of drum-forward mixes), Redemption is a nicely rounded out beast. Equally as devastating as their countrymen, yet providing a more spiritually intellectual approach keeps Redemption as an album worth checking out. Try a little zen with your bludgeoning death metal.