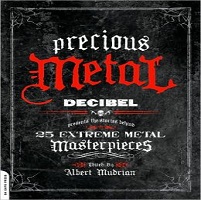 As print dies a slow and painful death, those who grew up devouring Metal Maniacs, Terrorizer, and Brave Words & Bloody Knuckles (read: anyone over the age of 25) are left with few little options. Luckily, in the span of five years, Decibel magazine

has emerged as the pre-eminent extreme metal rag. And while we won’t go into reasons why Decibel is a worthy read (we don’t plug other publications for selfish reasons), it’s proven to be the only existing metal magazine on North American shores worth giving a flying-you-know-what about.

Central to Decibel’s worthiness is their “Hall of Fame” feature, which takes one classic metal album, interviews all of its living key players, and breaks it down. It’s vastly entertaining

, especially those of the anal-retentive nature (i.e. yours truly) who want to know every tiny factoid about a classic album. WithPrecious Metal: Decibel Presents the Stories Behind 25 Extreme Metal Masterpieces, editor Albert Mudrian culls 25 of the best Hall of Fame into one excellent, I-can’t-put-this-down read.

The obvious suspects are included: Slayer’s Reign In Blood, At the Gates’Slaughter of the Soul, Entombed’s Left Hand Path, so on and so forth. However, the real charm of this book

are the selections on Monster Magnet’s Dopes to Infinity, which turns into a shit-talking fest between the band, or the story behind Bob Rusay’s unceremonious dismissal from Cannibal Corpse during the recording of Tomb of Mutilated, or Kyuss drummer Brant Bjork

freely admitting he was going through the motions during the band’s hallmark Sky Valley album.

Swathed in honesty, this stuff gets the nitty gritty of the albums in question. Even relatively recent releases such as Converge’s Jane Doe and Dillinger Escape Plan’s Calculating Infinity are included are give further weight to both album’s already immense girth.

The Hall of Fame idea one of those strokes that most metal journalists wished they would have came up with, so hats off to Decibel and its staff for bringing it to life. Totally recommended for anyone who craves knowledge on metal that goes behind and beyond the music. Gnarly.