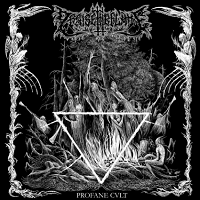 Originally released earlier in the year as a MCD, Blood Harvest found it suitable to re-release Profane Cult as 12” vinyl with three bonus songs tacked on. Always with the vinyl. Praise the Flame happen to be a freshly-minted Chilean black/death trio, who are barely a year of age, but already have a reputable release under the belt via Profane Cult, which works all sorts of (black) magic thanks to a surprisingly sturdy production job, and proper paid attention to extreme metal forerunners of the 80’s.

Mainly on the necro death metal side, Praise the Flame’s rambunctious riffs are an upgrade over the oftentimes too simple meanderings of the retro-minded. Therefore, the caustic riff action, combined with over-the-top drumming on “Endless Scourge” make it one of the year’s more exciting extreme metal numbers; a bit like if Morbid Angel went back and re-examined Abominations of Desolation while tagging along with Sodom. The album gets its token mid-tempo/then jets-on number on “Doomed By Darkness,” which shadows all sorts of murky chord strokes, while a demo-quality version of Unleashed’s “Before the Creation of Time” pays proper homage to the Swedes while not aping them entirely.

Much more to the point and assault-ready than bands of similar age and experience, Praise the Flame have the look of an outfit who has paid careful attention to those who came before them. Perhaps it’s this lack of tunnel vision and obvious display of care that makes Profane Cult such a shock to the retro system. Quality stuff all around.