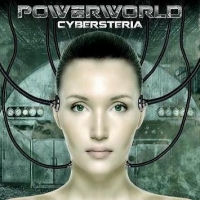 Fluctuating lineup changes appear to be a constant in today’s metal scene due to the up and down nature of developing consistent income with the changing music marketing model. In the case of melodic power metal band Powerworld though, their third vocalist change in as many studio albums with Michael Bormann took place due to the death of Andrew ‘Mac’ McDermott in October 2011 as a result of kidney failure. So it’s understandable that Cybersteria may represent a transitional album and possibly serve as cathartic therapy as a move forward for the quintet.

Featuring current and ex-members of Freedom Call and Jaded Heart among others, Powerworld aren’t spring chickens when it comes to this style. Should it really be surprising that keyboardist Marco Grashoff opens “Children of the Universe” with these space-like tones, transforming into this mid-tempo melodic metal anthem – and the follow up “Slave to the Powerworld” cranks up the guitars for Andreas Rippelmeier to prove his importance in the sonic landscape? Michael’s bluesy touch and natural multi-octave register melds seamlessly be it on Rainbow-esque material like “Coasts of Tears” or a straight forward power number with commercial potential such as “Like a Shadow,” reminding me of his best days in Letter X or Bloodbound.

Within a 60-minute album there will always be a track or two that meets with general apathy because who can really sustain upper echelon quality for that long- on Cybersteria those moments would be the semi-balladic “You Gotta Hold On” and the 48-second “Am I Digital” interlude. Tackling the idea of social networks making people feel lonelier with an Orwellian 1984 twist to current times, at least the lyrics are not stuck in clichéd themes of dungeons, dragons, or warrior-life.

If you enjoy the collective works of Masterplan with more down to earth songwriting ethics, Powerworld could be a welcome addition to your metal collection.