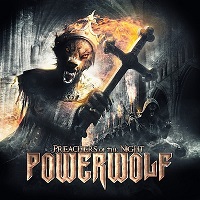 Preachers of the Night is album #5 for these German power metallers, and despite the strides Powerwolf has made in mainland Europe as this album gains album of the month accolades and a number one charting in the official German media music charts, I’m betting you haven’t seen much in North America on these guys. Relegated for the most part by their previous label to digital download sales status, let’s hope their new deal with Napalm brings the quintet better promotion worldwide, as with each successive album it’s easy to understand why the image and sound match up to impress the power masses.

With subject matter on religion, horror, werewolves, and mythology, the crux of Powerwolf’s sound relies on keyboard and guitar riffs that go for a hook element immediately, and followed up with choir oriented chorus melodies that promote audience involvement. The template is very Euro metal-oriented, mostly of a mid-tempo variety, although songs like first single “Amen & Attack” and “Lust for Blood” are pumping up the adrenaline factor a bit with double bass propulsion from Roel van Helden and Attila Dorn’s multi-octave, Transylvanian-like vocal command.

“Secrets of the Sacristy” and “Cardinal Sin” feature a couple of happier guitar harmony sections straight out of the Kai Hansen/ Gamma Ray school of rock, while “Kreuzfeuer” will make you comb through your Sabaton/ Manowar meets King Diamond/ organ church reservoirs. With cover art and personal makeup imagery to match the likes of King Diamond and Lost Horizon in their prime, the band deserve all the good fortune coming their way, as they provide high quality power metal with an equal emphasis on the entertainment factor.

Being a fervent follower since 2005’s Return in Bloodred debut album, Powerwolf may live within certain clichés of their genre, but when locked into the right metal call and response parts there may be no German act better and on point than these gentlemen.