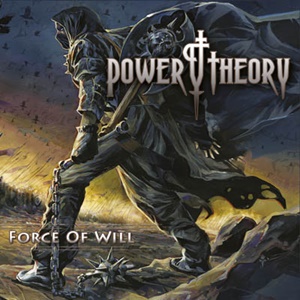 Adapting to the trials and tribulations of a music career, perseverance usually prevails as the strongest people survive to develop respect and admiration. Power Theory come to their fourth studio album Force of Will with three new members in the quintet – key components in developing a US power/heavy metal platform that could vault them up the ranks from the previous groundwork laid down since their start in 2007. Through the additions of drummer Johnny Sasso, guitarist Carlos Alvarez (who has been involved with the band in mixing/production roles since Driven by Fear in 2015) and singer Jim Rutherford it’s quite apparent the quintet has taken extra measures to beef up the songwriting and performances to another level, making these twelve tracks highly engaging for imminent headbanging and audience appreciation.

The foundation of Power Theory comes from a mix of US and European traditional metal influences – old school power present a la Iced Earth, Jag Panzer, Judas Priest, and Metal Church when you take in a lot of the potent rhythms, soaring choruses, and unmistakable twin guitar harmonies that creep in and out of songs like “Draugr” and the tribal/militant mid-tempo anthem follow-up “If Forever Ends Today”. Guitarists Bob Ballinger and Carlos Alvarez fill up the sound through their decades of seasoning, knowledge, and intuition – injecting the songs with the right vitality, key riff shifts, or supplementary counterpoint efforts to heighten the heaviness and emotional intensity within tracks like “Spitting Fire” (featuring a guest vocal appearance from Piet Sielck of Iron Savior) or the dramatic serene to cultural gallop-oriented seven-minute plus closer “The Hill I Die On”. Power Theory has had great vocalists throughout the years, but Jim’s obvious smooth and multi-octave mid-range to slightly higher note holding ascensions are in the class of Matt Barlow and Harry ‘the Tyrant’ Conklin, making “Mountain of Death” and “Path of Glory” two high caliber efforts that are key to his mesmerizing melodies – especially riveting during his layered vocal harmonies during the chorus of the latter. Even though the record contains almost an hour of music, the diversity and dynamics for arrangements never make the material feel exhausting to consume – alert attention to the hooks and varying tempos keep the energy-level from sinking.

Witnessing this band back in 2013 on tour with Vicious Rumors and Seven Witches, Power Theory have sharpened their sound and created a monster of a record for Force of Will. If you love sturdy heavy metal with old school/80’s-oriented power ethics, this is one of the best records in that field this scribe has heard in quite some time.