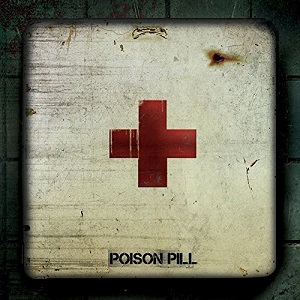 Shrouded in secrecy and mystery, very little is known regarding the Nordic metal act Poison Pill. Choosing to base themselves on music and words over faces and names, this scribe has no idea who is in the band, how long they’ve been around, if there are previous releases, or even what they look like. Placing the focus inherently on the self-titled product, what you’ll find is an enticing and addictive meld of traditional and power metal themes with catchy hooks and choruses abound throughout these twelve tracks.

“Introspection” opens the record in Judas Priest/Accept-like fashion, almost paying homage to “The Helion” meets “Metal Heart” with it’s keyboard to guitar build-up before the first vocal-led track “Wake the Sinner” assaults your ears. A double-bass pumping mid-tempo charger, it’s where you notice the unique vocal delivery that is partial snarl, partial confident melodic siren where you can feel Dave Mustaine vestiges giving chase to King Diamond or Rob Halford at a moment’s notice. Sonic reference points for the riffing, atmosphere, and discipline come from multiple camps – probably due to the history of metal, there are moments within “Pitch Black” and “Terminal Point” where you swear Accept is in the building, while the slower, methodical pacing of “Confession of a Liar” brings about early Hammerfall synchronicity. Poison Pill switch up the tempos adequately during the record – just when you think they are settling into an anthem template, the double bass, speedier energy for “Jurisdictional Confusion” (there’s a mouthful) hits the temple and body midway through to elevate things to higher levels- the twin guitar harmony lead break very Teutonic and tasty.

The red cross symbol for the cover art plays into the minimalism of presentation and imagery – while the closer “Exit” has that lurching “United” / British Steel feel in terms of the guitar/drum back and forth underpinning. Poison Pill will gain favor for those staunch metal supporters who live for true music, the type that encourages unison vocal support and air instrument supplementation. Time will tell if they’ll live up to that Ghost-oriented anonymity as they build on their career- for now, it’s a testament to keeping the focus where it belongs, on the songs.