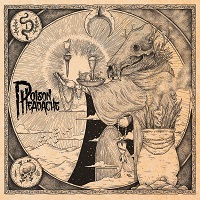 We’ve heard this drill before: hurried, somewhat brazen drumming colliding headlong into the vaunted, but-oh-so-played-out Swedish death metal guitar tone. It’s such a familiar formula, that you wouldn’t be at fault for at least temporarily forgetting Poison Headache wasn’t the ham-fisted composite of 50 other bands. There is, of course, some real bulldozers here, like “Sin Eater” and the cleverly-titled “Rot with Me,” a song that borrows a few cues and screws from early Entombed. But then again, you’re left to work around a lot of same-y, uninspired elements from Sgrosso’s meaty, but bland riffing, to the restless bark of Andy Kutka. The occasional melodic element sticks it head out on closer “Discloser” (which is probably the best song of the lot), so at least Sgrosso decided not to bring the ideas of his other two bands into the fray. Things could have gotten really hairy.

Such hawing from us largely comes down to Poison Headache not adding a single new, exciting idea to the grand underground scheme of things. Yeah, it’s cool to dig up old friends and kick out the jams for the sake of nostalgia, but if we’re looking to further clog the drain, send in more bands like Poison Headache.