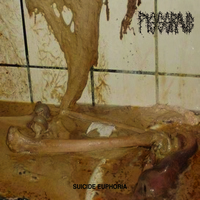 With a name like Pissgrave and cover looking the way it does, you know that you are going to be dealing with some pretty depraved stuff. It’s also some pretty stripped down and raw stuff, which is not meant to be taken as a complaint but as a compliment. It may seem strange, but once you hear Suicide Euphoria, you’ll understand.

Despite the bare-bones approach, Pissgrave amicably do not easily fall into one of the seemingly many death metal classifications. There’s no technical fireworks, no eerie dissonance or cavernous approach, and no old-school buzzsawing going on. Pissgrave instead work their magic by going all in, delivering an onslaught of uniquely depraved death metal. The production gives it a suitably raw and muddy approach (see the cover art), and the riffing gives it an abrasive edge that feels caustic enough to melt some flesh. The vocals are utterly inhuman, with a lot of indecipherable grunts and roars, just there to add to the chaos and crazed sound of the band.

Unfortunately, what works for a relentlessly brutal and menacing approach doesn’t lead too far in many dimensions. There will most certainly be a ‘song blurring’ by the end of the album, though there are a few cases that avoid this. The militant, thrashy riffing of “The Second Sorrowful Mystery” is strangely intoxicating, as is the charging opening of “Pain Enchantment.” With more moments like these, the band could really be onto something special.

Despite some song blurring, Suicide Euphoria is a promising album. The sheer intensity (and lack of easy compartmentalization) give the band a solid thumbs up, and will no doubt be looked upon as one of 2015’s most intense offerings.