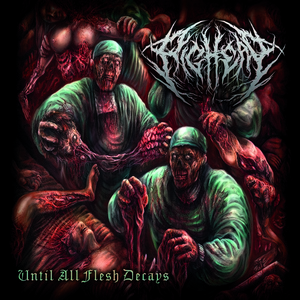 Brutal and slamming death metal is often more fickle than one might expect. There’s a certain level of intensity that must be maintained in order for the sound to really hit home properly. Particularly when there are so many that already view the genre as limited in its appeal. Pighead aren’t really going out of their way to move past that set audience with Until All Flesh Decays.

Pighead don’t really do anything wrong per say, but everything feels more like your standard edition brutal death metal than anything else. From the stock sampling to the overly dark riffs (and equally low gutturals), it never shakes its familiarity. Of course, plenty of other bands play into this same brutal death movement and make it work. Pighead just never feel truly compelling in the timespan of the album, which only runs for a little over a half-hour. Death metal like this needs to have intensity, in the way that it grabs you and never lets go. Much of the album (all but say, the last three tracks) never hits that mark and begins to feel a bit stale even a few songs in. By the time that “Siamese Spawn” starts to rip through the speakers, which it does quite well, the battle for the listener’s attention has already been lost. They do manage to keep the energy moving for the last two tracks, but one can’t help but feel that if this feeling permeated over the course of the entire album it would end up sounding much more favorably.

Until All Flesh Decays feels more like stock brutal death metal than anything else. It’s a problem when a 34-minute album starts to feel like a chore. Particularly when the last few tracks seem to turn this around. Perhaps that potential can be better realized with their next release.