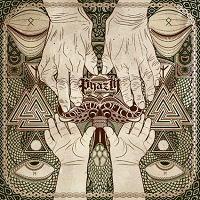 This scribe was always tripped up by the Antebellum Death ‘n’ Roll title, which graced Phazm’s second album in 2006. A French band making reference to times before the Civil War was a bit of a head scratcher, but then when put into context, Phazm, back then, were trying to muscle their way into the oddball, death ‘n’ roll conversation (the song “So White, So Blue, So Cold” instantly comes to mind). The band followed that album up with Cornerstone of the Macabre, only to go on hiatus for eight years, eventually returning with the inspired Scornful of Icons.

At first blush, some of the esoteric elements of the band’s sound have been pushed to the back. The album’s first two songs: “Ginnungagap” and the feisty “Ubiquitous Almighty” spew forth a black/death meld that illustrates Phazm’s technical reach. The tech/thrash bind of “The Soothsayer” recalls a less cyber Darkane, while “The Godless Pope” unfurls some of the album’s most extreme elements, including subhuman vocals, relentless blasting, and chaotic riffing, which is perhaps the album’s most defined quantity. Elsewhere, “Conquerors March” follows a similar thread, evoking rapid stop-start staccato dynamics, although with some light industrial tinges.

The true departure track on Scornful of Icons is the title track. Beginning with folk-like violins (of all things), the song thrusts itself into a whirlwind of dissonance and operatic female vocals. It’s almost like how Celtic Frost circa Into the Pandemonium would sound had they actually had some technical prowess. But nevertheless, it’s a daunting number, one that tops off the track listing with ease. And if you look at where Phazm were eight years ago (or even ten), they’re certainly not the same band. Scornful of Icons may not be viewed as a tried-and-true comeback album, but given the layoff and the band’s quiet state, it’s a welcome return from a French entity who shouldn’t be as unsung as they are.