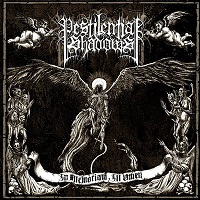 Leave it up to a black metal band to give itself yet another outlandish tag. This time, it’s “Anti-human plague black metal” from Australian primitive black metallers Pestilential Shadows and yeah, it’s fitting, but you know how this works – black metal bands take a lot of liberty with how their nicknames. They could dub themselves anything and we’d buy into it. Big whoop.

Anyway, In Memoriam, Ill Omen is strong across the board, which is not much of a surprise considering Pulverised is their home. Sonically, it’s hazy, but urgent, stockpiled with riffing that is melodic as it is ominous. This is most evident in the middle of the album on “Of Loss and Suffering Inherit,” “For Man and Heaven’s Ruin” and “Sundered,” three songs smashed up against each other that cull from blast-attack BM, atmospheric BM, and primitive BM. A triple-play, of sorts.

It can be said the band (which is the project of one Balam) is sum of its influences (i.e. Darkthrone, Beherit, et al), and that’s fine – you’re not going to come up with anything fresh from this well (of souls). The crux of the matter is In Memoriam, I’ll Omen bears very few flaws, just doing enough to run with the bulls in the perpetually burgeoning black metal scene. A winner. 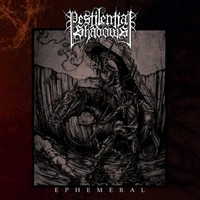