The prospect of a new Pestilence album doesn’t quite have the same muster since their old contemporaries Broken Hope, Carcass, and Gorguts have each returned with a comeback of their own in 2013. Of course, the band has been operating under “reformed” status since 2009’s above-average Resurrection Macabre, so there’s a natural wane of build-up with every successive album. Such things are bound to happen when you’re a known quantity, but not legendary. Obsideo finds the band on a new label (Candlelight), and with the same progressive-piqued death metal approach as its Doctrine predecessor, meaning, there’s not a lot of new ground to be tread.

To Patrick Mameli and crew’s credit, there’s never been an obvious reach to recycle their noted Consuming Impulse effort; clear strides are made to at least, mosey on down a different path. In turn, Obsideo caters to both the band’s effortless technical blend, as well as some of the groove-laden shoves they’ve become more to prone to of late. Navigating through the frantic opening title track is a good place to start; the riffs are bouncy, down-tuned, and with a lot of chug-a-lug to come along. “NecroMorph” is another jumbled DM masher, with exotic solos showing some range, while the slow, subterranean churn of “Saturation” is a winner, if only for it keeps matters to the point without sacrificing any heaviness.

The guts of Obsideo might fall into average territory, though, so keep yer neck on a swivel for those moments that pop with ferocity and precision. Frankly, this album doesn’t have the panache of any of the three comeback albums we referenced prior, so it’s a wonder if Pestilence will continue to remain one of those reliable old death metal standbys, or just gradually veer off to the side while bands with deeper pedigrees get their face-time. Hard to figure with an album like Obsideo. 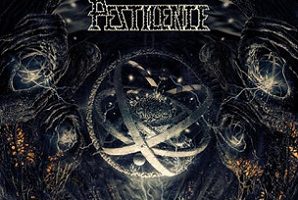