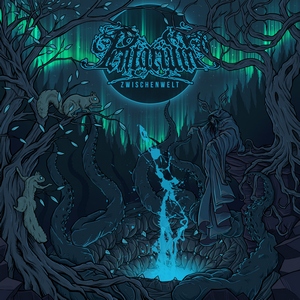 Nothing wrong with adding a little bit more melodic death metal to the daily playlist. Pentarium certainly fit the billing for a band looking to make a bigger mark for themselves in this area. After a ten year wait for their debut full length Schwarzmaler, the wheels are in motion to deliver melodeath to the masses with their second release Zwischenwelt.

What’s nice about Zwischenwelt is that it doesn’t really play by the established ground rules of the subgenre. At no point are you going to simply think, “Oh, Gothenburg metal” or that it sounds particularly Finnish in terms of its melancholy. Instead, they seem apt to apply some solid grooves into place, weave in some melancholy either through some synths or the riffs/melodies themselves, and avoid a simple one-sentence classification. They can bring things into more of an elegant and symphonic setting that’s near cinematic (see “Memoria”) to the more mysterious and gloomy (“Flames”) with seemingly little effort involved, as well as provide some driving and groovy tempos (“Abschied”). Of course, the key element that ties it all together is that of the melodic leanings, which stays on task despite the feeling or tempo. If there’s one point to be made on a critical end, it’s that the album is a lengthy one at 55-minutes. There’s much going on with the music and the melodies and tempo shifts do help significantly, but if one was to remove a track or two and get the time down to a more comfortable 45-minute length, it feels like it would be a little stronger on the whole.

Those who enjoy metal with melody that doesn’t relegate itself to a particular geographic stance should get some enjoyment out of Zwischenwelt. It keeps the modern grooves coming while simultaneously providing enjoyable moods and melodies to bring you back for more (even if it does feel a wee bit long towards the end).