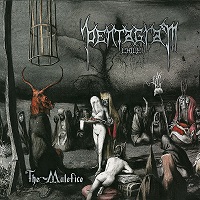 Not wanting to do battle with the Bobby Liebling-act of the same name, Chile’s Pentagram have adopted the Pentagram Chile moniker, thus eliminating confusion that reigned for several decades. The band’s story is a unique one: They formed in 1985, released several cult demos that influenced a wide range of death and thrash acts, only to have never made headway on a proper full-length until now with The Malefice. So if you’re keeping score, that’s a good 28 years before putting out an actual album.

The Malefice features ten brand-new cuts, along with seven re-recorded numbers that appear to be only available on the limited digipack version of the album. While it appears the band harbors a bit too much on their demo days, such packaging tactics might be worth doing when considering the band’s illustrious status. Nevertheless, the ten new jams are cut from the familiar cloth of thrash/death, with neither side taking precedence. However, the feral grip and rip of “The Death of Satan” is a rattler; as is “Sacrophobia,” which features guest vocals from At the Gates throat Tomas Lindberg.

And even if the themes on display tread a bit on the trite side, there’s a certain flair and sense of guile heard on “King Pest,” a rare death metal number that manages to build upon its initial structure with barbed riffing and scathing vocal in the span of six minutes-plus. So maybe it was a good thing Pentagram Chile held out for so long in making The Malefice. If anything, there has to be a nice gaggle of demo tape traders of yore itching to hear new material from the band. And cassettes are back en vouge too!