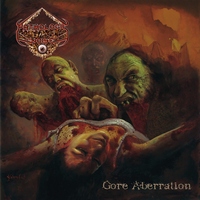 The latest case of the disappearing band act, Brazil’s Pathologic Noise recorded several demos starting in the late ‘90s and delivered a full-length, Sodomy and Delight on Flesh, in 2003 only to vanish shortly thereafter. In the ever-increasingly common theme of bands returning to the fold, Pathologic Noise has come back with Gore Aberration, and it seems that time has been on standstill (in a good way).

Without hearing their previous album, what you hear on Gore Aberration only seems logical to have been the next in line. With most of the band’s material slotted in the late ‘90s, the ‘brand’ of death metal that you are hearing doesn’t sound far from said era. Albeit through some slightly more effective production methods. The approach is dedicated and true though, with plenty of nods to death metal and thrash. You can hear the Slayer influences just as easily as the Cannibal Corpse, Deicide, and Morbid Angel-isms. Predictably, the savage riffing, frantic solos, and occasional groove emphasis hit all their needed marks, with “Bloody Deliriums” and “Sexual Murder” (you can feel the ‘Corpse influence from the start here) being some of the standouts as you make your way through the album. The grooves hit hard, and the subtle melodies (again see “Sexual Murder”) do provide a needed level of interaction to keep things fresh.