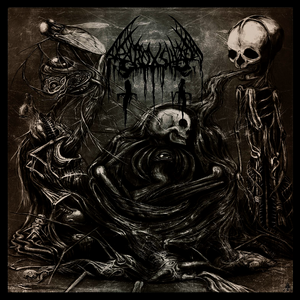 Easily falling into the ‘circling into the abyss’ waters that bands like Portal, Mitochondrion, and Adversarial revel in, Paroxsihzem have been relegated to a more underground status for much of their existence. The band has released a few demos, a full-length, a split with the afore-mentioned Adversarial), and well…Abyss of Excruciating Vexes. Originally released last year, the EP is seeing its first release on tape via Krucyator Productions.

If you are familiar with the opening comparisons, you’ve got a good idea about what to expect here. Full-blown, unadulterated death metal that’s bleak and caustic. Cavernous material at its finest – hitting the highest of speeds like a hurricane (with just as much of the dizziness) and slowing things right down to a murky crawl. The usual levels of chaos do indeed apply, with four original cuts and a cover of Arkhon Infaustus’ “Dead Cunt Maniac” thrown in for good measure. Some occasional black metal buzzsawing on the guitars is about the only thing that really causes Paroxsihzem to stick out from the rest of the dirty/gritty death metal movement (see “Isolation”). That’s actually the biggest downside to Abyss. It spends too long in familiar waters without really capturing that same level of chaos and adrenaline to really bring it into the ‘must-listen’ status.

Well-done for what it is, Paroxsihzem are only held back by the limitations of confining themselves to the genre at hand. The die-hard extremists will praise it’s fortitude in this regard, but without moving past those limitations, they’ll be forever relegated to second-tier status.