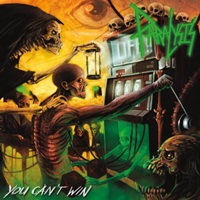 Picking up the latest EP from these New Jersey thrashers following an energetic live showing on tour up in Massachusetts recently, You Can’t Win is the second release for Paralysis. A fairly common metal name through the years (including a Dutch technical melodic thrash band signed to AFM Records in 2000), this younger group of teens and twenty-somethings live for a crossover sound: the type where gang background vocals shout in unison, the breakdowns occur frequently at certain expected times, and the band like to stay in a comfortable uppity, energy riff spot that Nuclear Assault, Exodus, and Municipal Waste live for.

The title track opens the proceedings in a stair step fashion: guitar harmonies giving way to Charlie Hudzik’s Overkill-like bass pluckings before the speedy slam number thrusts and parries like the best dualists in a fencing competition. After the crazy lead break we get the first of two ‘name’ guests as Tankard’s Gerre contributes his beer-soaked delivery to one of the latter verses- even appearing in the video. Toxik’s Josh Christian contributes his outstanding lead fluidity during “Transgression”, running circles around his brethren while also adding in some key divebombs for added energy measures. Rhythm guitarist Jon Plemenik doubles on vocals, and his voice has that Mille/Kreator rasp if taken into crossover realms – check out the rhythmic manner he belts out during the verses and chorus for “Scars”. The closer “All Your Lies” probably goes down the best in a live situation of the five cuts, many of the guitar parts and tempo shuffles reminding me of Sacred Reich in their prime, while ‘show me how to live/or show me how to die’ gains easy access to the recesses of any brain matter.

Overall these songs aren’t half bad – the production could have been a bit better as the thin guitar sound doesn’t stack up well against the snappy drum sound and the vocals seem to be pushed up a touch in the mix. Will the guest appearances up the curiosity factor? Possibly. But overall Paralysis need to bring more of their live game into a studio setting next time, or face the fact that there are thousands of other crossover thrash bands vying for limited consumer attention and disposable income – and it’s an uphill climb to breakthrough. 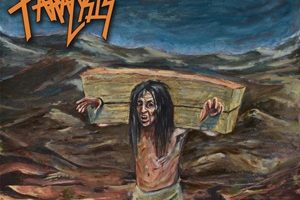 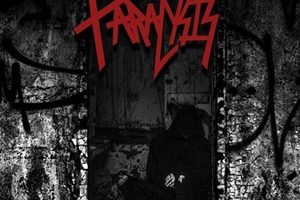