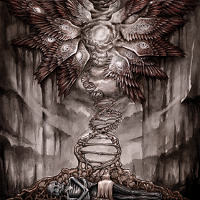 Right into the gut of what presently constitutes of en vogue USBM goes Palace of Worms, the one-man project of Balan, whose real name is Nicholas Katich. The band’s first full-length since 2010 happens to be The Ladder, an album that according to Balan, is supposed to bring the listener “further up (or down) the ladder and at the top is the beginning and the end, the end and the beginning.” Such a statement is meant to encapsulate the variety of sounds, styles, and moods on hand, which indeed there are plenty. However, that doesn’t an interesting USBM album make.

It’s tough to separate Palace of Worms from the rest of their contemporaries based on the production standards employed on The Ladder, not to mention the generalized riff approach of Mr. Balan. Outside of “Wreathe,” the album’s dedicated (and rather striking) departure track where he employs some moaning clean vocals (which are quite good), the bulk of The Ladder straddles the tough line between firebrand, primal black metal, and the tenants of sludge and doom. Naturally, they get all wrapped up in one another, and Balan manages to weave them effortlessly, but the noted lack of dynamics and sprawl found on cuts like “From the Ash” or “Strange Constellations” makes for a tough go.

The attempts to get out of the conventional BM/sludge realm do force matters through, like on “Ephemeral Blues,” which bounces around like Vattnet Viskar. Then again, you’re left wondering why Palace of Worms don’t venture down that path the entire way through The Ladder, an album partially undone by its lack of identity.