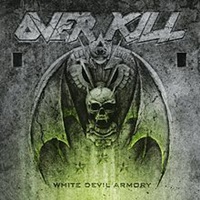 Fruitful times if you are a thrash head in 2014. Younger bands spurred on by the first wave of the 80’s spit out new records at lightning speed from North America to the Far East, Europe to South America including remote regions of the world. Keeps the older guard like Death Angel, Exodus, Testament, and the East Coast juggernaut Overkill on their creative toes, intent on proving there still is life in the current world without relying solely on your past glories.

Hot on the heels of their last two studio salvos Ironbound and The Electric Age, the 17th studio record White Devil Armory aims to appease the long-time fans once again, keeping thrash at the core of attack while also remembering that the best songwriting in this genre also contains a little bit of punk attitude and straight rock ‘n’ roll execution. After the 50 second “XDM” instrumental intro that will probably serve as their new live show opening, the first single/video “Armorist” bursts from your speakers, D.D. Verni’s bass rumbling away as the Dave Linsk/ Derek Tailer axe team layer the riffs for maximum cranium (and body) impact.

From there you get nuances of newer blast out drumming for “Down to the Bone,” a darker, moodier “Bitter Pill” that I think fuses a lot of their 90’s affinity for Sabbath-ish groove against this monster hook midway through that should set pits ablaze (I also love Blitz’s vocal, semi-scat breakdowns) and a crossover type number in “It’s All Yours” that should appeal to those into newer Gama Bomb. Do not fear though- Blitz’s impeccable timing and wordsmith gifts still reign supreme, be it rolling his tongue during the fierce “Pig” or coming up with a killer title in “King of the Rat Bastards” (picture the Jersey accent emphasizing ‘Bass-tards’).

Knowing when to go balls out and when to let material ride a different emotional wave- that’s what separates the best thrash bands from those who can’t make it past their toddler years. Overkill is as strong now on the live circuit as they were 25 years ago, and the 11 tracks for White Devil Armory contain all the sonic punch and power necessary to keep the locomotive going forward for decades to come. Well done, wrecking crew.