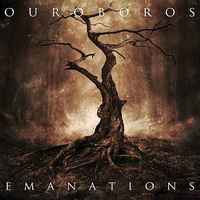 Blame it on Dimmu Borgir. Or more recently perhaps Septicflesh and Fleshgod Apocalypse. But there’s no denying the impact of an effective orchestration surrounding an extreme metal base. Ouroboros’ first album, 2011’s Glorification of a Myth, was a tech death standout, and the band is not intent to keep repeating itself. There’s some changes that you’ll hear on Emanations, but it’s nothing that will make you cry foul.

While Emanations is less flashy in the tech department than its predecessor, the enriched atmosphere that surrounds each track more than makes up for it. Working with the FILMHarmonic Orchestra of Prague, these Australians successfully upgraded their death metal core with plenty of pizzazz. Of course, there’s plenty of bombastic energy from time to time, such as the build-up on “The Sleep of Reason” and the more eastern feel to parts of “Amaranthine,” but they never let the orchestra get too much of the action. They still maintain a strong sense of structure and writing prowess that is dedicated to the guitars, allowing for some powerful melodies on “Catholicon” and “The Amber Light.” Perhaps the best example of Ouroboros finesse is that of the title track. It artfully combines some majestic leads (see near the three minute mark) with lush orchestration that builds into some monstrous riffs. Proof that metal can be simultaneously crushing and beautiful at the same time. It’s also worth noting how strong the production is here. All of the elements here get ample breathing room (even the bass), which is a nice surprise from such a symphonic group. Many far more established bands have utterly failed in these areas before but Ouroboros have really pulled it off here.

Emanations is a title that should catch the ear quickly. Great to see a band able to switch up their sound, while making sure that they are adding to it with more dimension and depth without sacrificing their roots. There’s appeal here from a death, thrash, and symphonic angle, and no one should walk away unhappy.