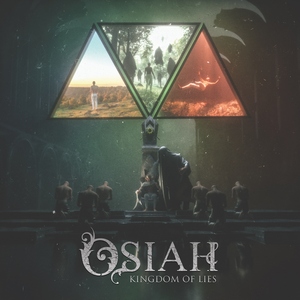 While some will argue that the zenith of deathcore has come and gone, from a musical standpoint there are still bands that are taking the formula and making it stronger (and more palatable for the ‘dyed in the wool’ types). There’s no argument that Osiah rely on the deathcore sound as their template, but they also weave in some other elements to keep it from being so one-note in sound.

The base of deathcore heaviness and some breakdowns can easily be found. Kingdom of Lies can hit you like a freight train of energy as the band kicks up their riffing and blastbeats. They also make use of a thick guitar tone to really embellish when they slow down to breakdown and mid-tempo speeds (see “The Western Star”). But like the stronger bands in this genre, they don’t merely toss breakdowns at every possible moment. There’s a rhyme and reason, and usually notable buildup before they tear down into a heavy breakdown. There’s also a number of tempos that are employed without things becoming too chaotic in nature, and the coating of sheer (brutal) death metal to the whole process makes them sound all the deadlier. Much like the music itself, the vocals find a way to stay varied and go into a variety of extreme metal growls – from low gutturals to higher rasps and plenty in between, it’s enough to keep you on your feet and interested.

While it may still occasionally get stuck into some of the deathcore traps, there’s quite a bit more positive going on throughout Kingdom of Lies. It’s ripe with heaviness and through a large number of collective tempo changes and interesting riffs, it retains much more identity than the average deathcore act usually displays. As the band’s second full-length, there’s still plenty of room for growth.