Orphans of Dusk – Revenant (Self Released) 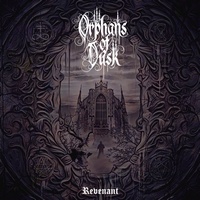 When it comes to death/doom, there’s often a tendency for bands to linger on the doomy side of things. There are some exceptions of course (Novembers Doom can write a real jackhammer of a song from time to time), but many forget to give the more aggressive elements their due. Not the case with the New Zealand/Australian band Orphans of Dusk.

Orphans of Dusk takes a dual approach to Revenant. On the one hand, you have more death metal inclined moments. These feature some strong growls and are usually pretty riff-centric. The riffs tend to be pretty memorable (see “Nibelheim”) and it works as a nice counter to the doom/gothic side of the band. Here you can read into the influences of everything from Type O Negative to Woods of Ypres to My Dying Bride. The clean vocals have a lower register, and along with the use of synths, bring much more of a gothic vibe to the band. If you look at the final track, “Beneath the Cover of Night,” you can listen to the gradual turnover within the track from a more traditional doom and gloom track which builds itself up for about 6 minutes and then transition to a more crushing finale. The transitions do feel pretty seamless for an initial outing.

As a four song EP, there’s a bit more value than what you may assume. Clocking in at 27 minutes, there’s a decent amount of material to be found. As Orphans of Dusk work up to their first full-length album, it will be intriguing to see if they can retain the dual façade without giving too much favor to one side or another. There’s a good division of the deathly and doomy here, and they could be on track to even better things next time around.