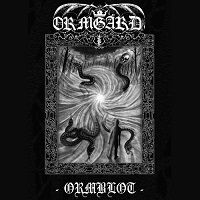 Originally released on tape three years ago via super-small BM indie label Scythe of Death Productions, Ormgard’s Ormblot has been repackaged and re-released through Forever Plagued. Because Ormblot is so early 90s-sounding, it’s like doing a reissue of one of the scene’s seminal black metal outfits…save for the fact Ormgard are hardly that, but kudos to them (or lone ranger Orm) for trying. With that in mind, this is teenage-era Emperor worship at its finest. (Read: Everything up to In the Nightside Eclipse. The band were quite young in those days, for you BM historians.)

With a sub-production job in tow, paired with the ample (and constant) use of keyboards, the Emperor comparison is too easy to make. After all, Ihshan and crew were one of the few willing to stick their necks out with keyboards in the early-to-mid-90s, for most of their contemporaries avoided them out of fear of retribution…or being shunned from the scene. Nevertheless, the flow and structure of cuts like the opening title track, and “Ohelgat Blot” purvey the cloudy, cackled, riff-buzz that comes with necro black metal, where dynamics aren’t all that important, but maintaining the atmosphere and pace is. Similarly, “Av Svartkonst & Fördärv,” asserts itself as the album’s high point, where ample keyboard swells align with crossed-up riffing and the near-dead vocal exhumations of Orm.

Somewhat of a novel release given the year it was recorded and how closely it resembles times of yore, Ormblot’s reach will probably be relegated to strictly the klvt krew, who usually find something of value within albums of this nature. But as always the case, imitation will only get one so far…